Update 10/27/06: And if you liked this and the one below, you might also find this year's walking forklift from Aliens effort kinda interesting.

UPDATE 10/25/05: If you liked this, then you'll...  probably also like my current costume project, where I attempt to be a APU walker from the two Matrix movies that everyone secretly enjoyed at least mostly because of the fight scenes but say sucked because the beret wearing, coffee sipping college lit guy next to them said to and god forbid he point his copy of Mao's Little Red Book at you and denounce you for an anti-intellectual for disagreeing with him.  Not that I'm bitter...

The Project
I've got a cool wife.

Concept
Build a walking mech suit (styled loosely after the Mad Cat from Mech Warrior) that I wear. It will have reverse jointed 'chicken legs'. My (not to little) torso will be completely enclosed and invisible. My son will sit in a seat in the front cockpit of the mech and 'pilot' it from there. Finally, there will be guns, lots of guns.

Body
The frame is built from 1/2" PVC and glued together using Hot Blue PVC glue. I use standard PVC connectors: 90 degree turns, T-Connectors, 45 degree turns, 3-way xyz type connectors, and more. The most expensive part of the project has been the connectors. "What?" you ask, "but PVC connectors are only 20-30 cents each!" Shut up! er, I mean, yes, that's true, but when you get 20, 30 or 50 of these connectors together, you start talking about real money. The PVC glue is really neat stuff. Its capacity for bonding with carpet is truly astounding, and it does well with PVC too.

I'll have at least one fan inside blowing on me to keep cool, probably a PC fan.

Legs
(aka, typical mech chicken legs)
You ever see Robocop? Watch any anime? If you have, then you know that all Mechs are required by law to have reverse jointed legs. I realized this early on, but I knew the implementation was going to be tricky. After contemplation, I decided against breaking my knees and forcing them to set backwards. Instead, I decided to make big reverse jointed legs that mount to the frame of the mech costume. The skeleton for each leg is made of two PVC pipes connected with a knee joint which, I must confess, is rather clever. (preen, preen)

Each leg attaches at the bottom to a big padded foot which is in turn attached to one of my shoes. I'm putting a spring on each joint so that the legs naturally want to fold upwards. This will make it a lot easier to walk, as it's a bit more difficult to life weight on your foot.

I think I'll get some Styrofoam blocks from boxes I've gotten computer stuff in and drill a 7/8" hole through the centers of them (7/8" is the OD of 1/2" PVC) and slip the pipe for the leg skeletons through them and glue them in place. That way, I'll have a lightweight and easy way place to attach the outside skin of the legs. The advantage to doing it this way instead of just using cardboard with no skeleton: strength. If my Mech can't kick a soccer ball, then why bother?

Cockpit
The main structure of the cockpit is two PVC pipes at the top and two at the bottom that connect the PVC rectangle in front to the frame. I'm trying to figure out how to get a good look for the windows. I want it to be open air, but it should have the structural look of something with windows, again, kind of like a Mad Cat mech.

Since my son will be 18 months old when Halloween rolls around, I need to keep him occupied, so I'll also be putting in some control panels that have big buttons and flashing lights so he can amuse himself.  This is, of course, assuming he doesn't panic when my wife jams him into the cockpit (mouth) of the costume (huge creature that looks like it's eating him),

I'm still trying to figure out the best way to carry my son. My first instinct was to rig some sort of Baby-Bjorn style device or backpack, but that doesn't seem practical. I'm taking measurements and seeing if I can attach a seat structure to the frame itself, check back for updates.

Gatling Guns
The Gatling/Mini-guns should be simple. I've cut a bunch of 1/2" PVC to 18" lengths and am designing around a 7" diameter for the barrels. I'm not sure what material to use for the rings that hold the barrels together, maybe hardboard? Depends on how easily I can cut it. If you have a suggestion, let me know! I have a jigsaw and a drill, so if you say 'easy, just use a circular saw in a jig', I will grab you and shake you like... well... like something that gets shaken severely.

If I can mount them on roller blade bearings so they can spin freely, that'd be cool to. Depends on how much time I have.

Rocket Launchers
The costume will have two missile boxes, one on each shoulder. For the tips of the missiles (which will be poking out), I think I'll use the paper snow-cone cups.

Sound Effects
Every good mech sounds like a walking forklift, so I'm investigating a number of different options.

I'll update this section when I finalize on something.

Paint Scheme
Since I don't have any religious connection to Mech Warrior, Steel Battalion, or Hello Kitty:Kat Karnage,  decided to design and paint this as if it was the near future and this is for the US Marines.  It will be painted in the desert camo style that Marine tanks and planes are painted with.  Of course, it will have lots of 'This is not a step', 'Warning Jet Blast', 'Ammo Loading' style decals on it.

Things it will NOT be doing
The following well intentioned suggestions have been nixed:

News
2/7/05 - VIDEO - Back on Halloween 04, got some quick video clips of the costume in action.  Thought some of y'all might find it interesting:  WalkingTheMech.wmv

10/31/04 - Wore it again for Halloween, was very successful.  We had just moved into our new home, so I figured wearing this into the neighborhood would help make a good impression.  Lots of honking, people saying 'What the...', and plenty of kids walking up to see the costume up close.  Very satisfying!  Much better then the rained out Halloween in Los Angeles 2003.  I mean, whoever heard of RAIN in Los Angeles?

11/04/03 - Dangit, having trouble finding good pictures.  Here's a pic, better then nothing.  Please note that I'm wearing the wrong pants and you have to squint to see the gatling guns: 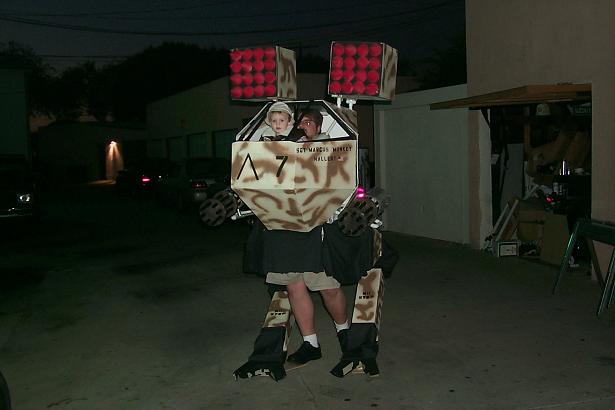 10/6/03 - It's been a month, and I've done a lot.  I've skinned much of the outside of the mech.  The legs are almost done to the point illustrated in the 9/1/03 update.  I've built a seat out of PVC that my wife has upholstered, and the feet are under design and construction by a friend of mine.  Here are some pictures:

9/1/03 - I started work in earnest on the legs today.  I cut rectangles of foam board (Styrofoam, from a craft store) and drilled holes in the centers of them that fits the PVC.  I put them over the the 'bones' of the legs and glued them in place.  I've also decided to move the legs outwards a little so they won't rub against my legs.  Sure, doors will be a little harder (hells bells, the main frame of the body is already 34 1/2" wide!), but such sacrifices are needed in the quest for neat costumes.  Here's how it will work, through the magic of pbrush.exe:

Links
Links to neat sites that have inspired this:

If you have any ideas or comments, please e-mail me:  ben@vipmail.com